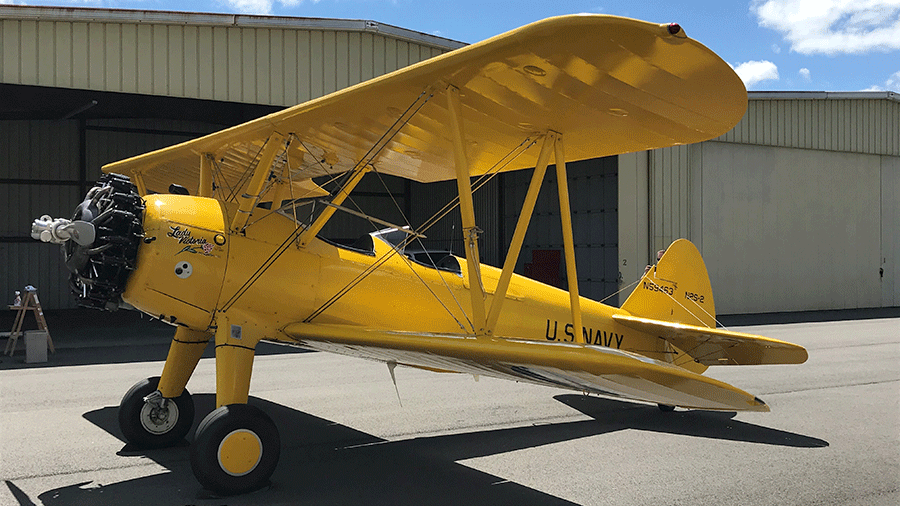 Here’s your chance to own a piece of WWII history. Our Stearman was totally restored in 1970, with just over 1300 hours since. This plane was owned by the donor family for the past 39 years and in 1985 was recovered and repainted as a bright yellow Navy N2S-2 trainer. The family has always hangered the plane and it even was kept in a heated/air-conditioned hangar for most of it’s time with them. The Stearman has 451 hrs since the Lycoming R680-B4D (-17), 225 HP, has been overhauled and it has a Hamilton Standard metal prop that was converted to fixed pitch.

After the war, this plane went immediately to work as a crop duster in TX and FL. In 1970, the plane was totally restored in a crop duster configuration, including metalizing the fuselage. After only 275 hours as a crop duster, in 1980 it was sold to an aerial advertiser in NY, who removed the hopper/sprayer and reinstalled the front cockpit, where it flew for another couple hundred hours. The donor family purchased it in 1982 and flew it back to WA state, where it’s been ever since (currently at KOLM, Olympia, WA). The donor family returned the registration back to a Standard Airworthiness Certificate. They also had the wings rebuilt and recovered, repainted the plane, updated the electrical system to 24 V with an alternator and starter (removed the inertial starter), installed a radio, transponder/encoder, and intercom.

It is in very nice condition and will be ready for your enjoyment. The plane is scheduled to have a fresh annual inspection at the end of September. We are selling it in Olympia, WA with the inspection included.

Best attempt has been made to reflect accurate information. Subject to verification by the buyer.

There is an R-680-B4E engine available for sale. The logbook is below, however you can check the engine out on Barn Stormer’s website.